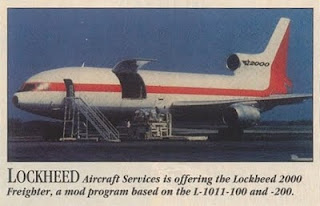 This was an old idea from Lockheed to convert some L-1011s to freighter aircraft. However, Lockheed never sold this mod program.
Publicada por Anonymous em 5:44 AM No comments:

Email ThisBlogThis!Share to TwitterShare to FacebookShare to Pinterest
Etiquetas: Aircraft

We must be careful when comparing these two aircrafts. The main difference is: when did McDonnell Douglas have its first DC-10 long-range aircraft? It entered in service in 1972 with the DC-10-30 series.

Why the long range version of the TriStar was so delayed? Well, not because of RB211 reliability problems or so. Just because its production and development for more powerful versions was halted almost for one year due to RR bankruptcy, which also affected initial sales. It was delayed even further due to overcapacity with the airlines and depressed market. The TriStar 500 could have been ready by 1977 and before that Lockheed studied -250 long range version with the same -500 engines, MTOW and fuel capacity. But it never came to a production standard. There are only 6 L-1011-250 which were converted from -1 series in 1986, already after the shut down of the L-1011 production line!

When TriStar 500 entered in service, it was too late. In the early 80's it was facing competition not only from the DC-10 but also from 2nd generation and more fuel efficient, two crew man, twin jets.

No doubt the L-1011 was technically superior and safer than the DC-10. However, the DC-10 when compared to the TriStar had a better payload-range having from the beginning a true long range version.
The L-1011-1 was simply fine for USA's coast to coast routes for which it was designed.

Finally, it seems that McDonnell Douglas also never made money with the DC-10 program. If it wasn't for the KC-10 contract with 60 units built for USAF, which kept the production line opened until 1988, it would also have suffered big losses.
Publicada por Anonymous em 2:53 AM 3 comments: