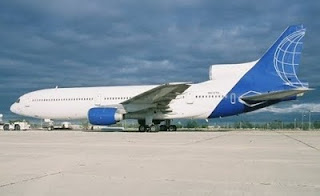 A jumbo jetliner from the past once fated for scrap will make one last flight after all — to the Airline History Museum in Kansas City.

The vintage Lockheed L-1011 is scheduled to land here at 1:30 p.m. Saturday and become an educational exhibit.

The museum made the same announcement last April, and a crowd of aviation buffs arrived for the landing but were disappointed. It turned out that the Federal Aviation Administration had serious reservations about whether the craft was airworthy to make the trip from Roswell, N.M.

But months of effort by Airline History Museum director Larry Brown and other volunteers persuaded the FAA to allow the one-time trip after all. Brown received the go Monday morning, and a permit was to arrive by overnight mail.

The huge plane, which flew under the colors of hometown airline TWA beginning in 1972, will be permanently parked south of the museum hangar at Wheeler Downtown Airport, its tail hanging out over the fence surrounding the airport apron.

The museum plans to make it a classroom of sorts for the history of passenger aviation. School groups will sit in first class and watch an educational video on the plane’s in-flight monitors. The L-1011, thought to be about the last salvageable one of its kind in the U.S., will complement the museum’s other planes, including a Lockheed Constellation, a DC-3 and a Martin 404.

To secure a permit for the L-1011, the museum had to satisfy 28 “airworthiness directives” for the FAA. Agency spokesman Lynn Lunsford in Fort Worth confirmed Monday that the FAA inspector had signed off on the permit.

The event is important to aviation buffs and others because the L-1011 was only the second wide-bodied jet and is considered a reminder of the high times of passenger flight, both in comfort and in gadgetry. It was the top of the line in electronics at the time and had Rolls-Royce engines.

Lockheed had made only 250 of the planes when production ceased in 1983. None has ever landed at Kansas City’s downtown airport.

This plane has had a checkered history since it left commercial service. Under a previous owner, it went through various registrations and incarnations in locations from Africa to South America, and he wanted to sell it.

Brown became aware of the plane and was negotiating its purchase when the owner instead sold it to a scrap dealer. But the dealer agreed to sell it to the airline museum for $100,000, which was provided by benefactor Paul Pristo of Arizona, who had also helped the museum acquire its “Connie.”

Brown thinks securing FAA approval to fly the L-1011 to Kansas City was complicated because of its past.

“The FAA said that it had been operating illegally,” Brown said. “They were mad as hell at the airplane and its owner. They took it out on us. I explained to them we were not part of the problem. We’re trying to save the airplane.”

Brown got help from Ann Meili, a former L-1011 flight attendant for Royal Jordanian Airlines and American Airlines. Because she had been hired by the former owner to train new flight crews for him, she knew the plane’s history.

“I knew exactly where that airplane had flown from 2002 until it ended up in Roswell,” Meili said Monday.

Brown was able to calculate that the plane had logged 30 to 35 hours of flight during that time and to relay that information to the FAA.

Another critical concern was a rear spar that provides strength where the wings are attached to the plane. The L-1011s were supposed to have modifications to the spar because they were in danger of cracking. This airplane did not have the modification, but it also did not have cracking, Brown said.

In other respects, the previous owner had taken good care of the plane. It has new avionics, a new paint job and new furnishings.

“The interior is spectacular,” Meili said. “It’s absolutely beautiful, all redone in royal blue with new covers on the seats, new carpet and carpet on the walls.”

Still, the Airline History Museum had to do about $60,000 of mechanical work to make the craft airworthy.

Earlier this month, the flight crew fired the systems up and taxied around the runway in Roswell. Engine No. 1 smoked a lot, but it just needed to be blown out after three years of sitting idle, Brown said. Videos of the tests are available at www.ahmhangar.com and on YouTube.

The plane will be flown to Kansas City by a crew that stays certified for the L-1011 by training in a surviving simulator at Delta Air Lines in Atlanta. FAA restrictions will require the plane to carry only essential personnel and not to be fully pressurized. It must fly slower and at a lower altitude than commercial aircraft and avoid congested areas.

There will be a short ceremony when the plane lands, as well as some photo ops for retired TWA crews. Then the plane will be opened to the public by way of a stairway to the cabin door, which is 15 feet above ground.

The L-1011 will be conspicuous to motorists on the Broadway Bridge and the highway next to the airport. It is expected to be popular with visitors.

“It was a plane the passengers loved,” Meili said. “It was modern, it was sleek, it was beautiful.”

Email ThisBlogThis!Share to TwitterShare to FacebookShare to Pinterest
Etiquetas: Memorabilia